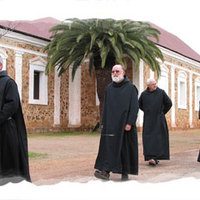 So much more than just a fascinating tourist destination, the picturesque WA monastery town of New Norcia is a living testament to the vision and toughness of our pioneers.

In 1846 four Benedictine monks led by Dom Rosendo Salvado and Dom Joseph Serra travelled through the rugged West Australian bush to found the monastery at New Norcia. Like the pioneers of their time the monks were men of great determination and vision, enduring extreme hardship while establishing their mission by the banks of the Moore River. They set about planting crops, building stone huts and making contact with the local aboriginals who settled near the monastery. Dom Salvado’s most cherished ideal was the greater care of the aboriginal population and the monks supplied their food, ministered to their illnesses and injuries and undertook the education of the aboriginal children.

Originating from Spain, Dom Salvado appears to have become interested in Homoeopathy because of the acclaim Dr Samuel Hahnemann was receiving in Europe with his highly successful treatment of Typhus with homoeopathic doses of Rhus tox, Hyoscyamus and Bryonia during the battle of Leipzig 1813.

Dom Salvado brought with him an extensive chest of homoeopathic remedies with which he ministered to the monks, local people and aboriginal community. Monastery records show that Salvado corresponded with Florence Nightingale on the subject of contagious diseases and kept detailed journals, some of which described physical symptoms, bodily functions and the like.

There are letters in the New Norcia archives which record orders through a London shipping agent for homoeopathic books and replacement remedy supplies to be purchased for the monastery from Goulds Pharmacy of London and a homoeopathic pharmacy in Bath. A letter dated 19th November 1880 confirms that the order for a Book of Chemistry and a chest of Homoeopathic Medicines was to sail for Australia on “the Daylight” leaving about 15th December. The letter also mentions the very good price they were able to secure for the sale of the last shipment of New Norcia wool and advice from Marseilles on the Care of Church Ornaments as requested.

The monastery houses a museum that gives visitors great insight into the spartan lives of our founders, it includes an impressive display of Dom Salvado’s original collection of remedies, books and homoeopathic tools of the trade. There are several small wooden storage chests containing as comprehensive a range of remedies as a modern day homoeopath would stock in their dispensary. For the most part these remedies are 6c and 30c potencies and reflect the use of homoeopathy in Europe and England at the time.

Interspersed with the homoeopathics are many herbal remedies, tinctures and tonics that were probably used by subsequent monks and members of the community. Also on display in the museum is an array of artefacts tracing the history of the New Norcia aboriginal mission to current time as a spiritual, cultural and educational centre. The art collection is one of the finest collections of religious art to be found in Australia.

The monastery library and archives, which are unfortunately not open to the public, house thousands of books, rare imprints and manuscripts. Among the collection of homoeopathic books, a shifting emphasis from the philosophical texts (Hahnemann 1845) to the more practical (Ruddock 1879) is observed. Initially Salvado would have required the academic texts for their philosophical background. As he used his remedies in the treatment of the local aboriginals and community his references would probably have been applied more to the practical, therapeutic texts – this is reflected by the publication dates of his book collection.

Many of these texts are still in use by homoeopaths today with of course the addition of new works. As we know this is not because the content or remedy pictures have changed but rather that we prefer modern language and find it easier to relate to our cases. No homoeopath would be without Samuel Hahnemann’s definitive text the Organon and in recent years Salvado’s copy has been identified with the belongings from his cell at the monastery.

Dom Salvado possessed in abundance the great qualities of the Benedictine monk. His outstanding physical and intellectual powers combined with his single-mindedness of purpose and absolute obedience to giving up his will to the cause have resulted in the New Norcia we see today. His character and personality were reflected in the depth of the grief experienced by the local aboriginals when they heard of his death in 1900.

After the passing of Dom Salvado the new superior Abbot Torres, who had been chosen by Salvado to carry on his work, gave the mission a new orientation making it a centre for education. He designed and personally supervised the construction of two boarding colleges, St Gertrude’s College for girls and St Ildephonsus’ College for boys. A first class wood-carver was commissioned to beautify the chapels and rooms and the musical talents of the monks were encouraged and developed. These years of change and progress transformed the mission into a unique centre of religion, education and culture.

In the 1980’s dwindling numbers heralded the closure of the colleges and boarding school and the monks were faced with the task of reinventing themselves or face the subsequent closure of the monastery. Showing the spirit of their forbears the monks took stock of their attributes and developed them further into a thriving tourist venue with an emphasis on the experience of the monastic life, the products of their toil and the beauty of their music and art.

The architecture is spectacular and includes a mixture of classical Mediterranean design, along the lines of the Spanish, Moorish style. Some of the buildings are castle-like in their appearance and of the 65 buildings in the town, 27 are classified by the National Trust. The original college buildings are now used for retreats, conferences and school camps. Many couples chose to have their wedding ceremony in the richly decorated chapel with its towering altars and magnificent carvings.

Produce of New Norcia revolves around the Mediterranean staples of bread, wine and olive oil. The breads, cooked in a wood-fired oven, are famous and are sold through the museum gift shop, along with traditional Italian nut cakes, biscotti, preserves, wine and olive oil produced from a grove planted in the 1860’s. New Norcia produce is now highly sought after and is distributed throughout Australia and overseas. In addition to local produce the gift shop stocks a range of books, music, gifts and religious items. Currently the home of 16 Benedictine monks, New Norcia welcomes visitors to enjoy its historic beauty.

As a celebration of our origins Homoeopaths went on a day trip to New Norcia as an optional social event at the 5th Australian Homoeopathic Medicine Conferecne 2006. What a great opportunity for homoeopaths to revisit our humble beginnings and rejoice in the courage of great men like Hahnemann and Salvado.

Register now for our upcoming